Los Angeles — When Shalena Smith, owner of Shalena Smith Interiors and Gaga Designs, purchased her Mediterranean-style home 17 years ago, she and her husband had a budding family life with a two-year-old daughter and another on the way. Before moving into their Los Angeles, CA, residence, they did a complete remodel, which also included the kitchen.

“At the time, trending colors were very dark,” she says, referencing the burnt orange and deep brown hues that were joined by faux paint techniques and Venetian plaster walls. “I also made a mistake that I now tell my clients never to make…making defining decisions before living in a house. It wasn’t until we moved in that I realized I have a dark house without a lot of windows, especially in the kitchen where I now had dark brown cabinets streaked with multiple colors, which was another trend at the time.”

Smith fast forwarded through years of growing her family, as well as an interior design business that includes a roster of celebrity clientele such as Mariah Carey, Sean Combs, Heidi Klum, LL Cool J, Tamara Mowry Housely and Mark Paul Gosselaar, to name a few. Then came the realities of 2020. One of Smith’s daughters was a high school senior, the other was in college. Due to the pandemic, the entire family of four was living and working at home…full-time in a dark, outdated kitchen.

“During the stillness of the pandemic and lockdown, I realized that our kitchen just didn’t function in a way that met our needs anymore,” she says. “I had time to think about our lifestyle and how we used the space. I saw that the kitchen is the heart of our family and that it was time for a change.

“I also realized that I could practice my craft in my own home,” she continues. “As designers, we’re all busy, and it is challenging to be our own client, but we deserve to treat ourselves. I think it’s important that our homes are a reflection of what we do…and they should inspire us every day.” 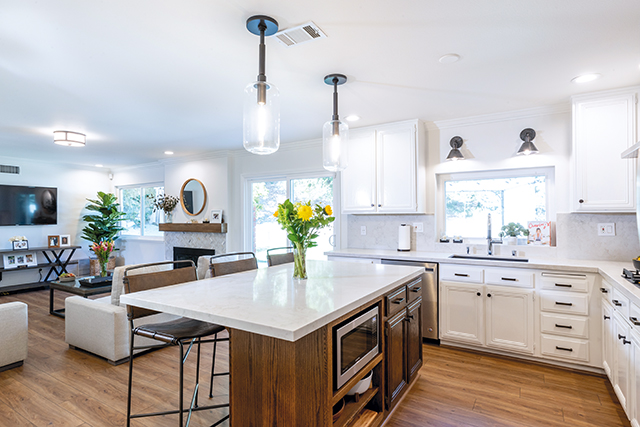 To accommodate her budget, Smith repurposed the peninsula cabinetry for the island, combining the 36″ door/drawer base cabinet with a new 24″ open-shelf cabinet that would enable her to remove the microwave from the countertop and house it in the island.

As an advocate for organization, functionality and safety before aesthetics, the designer focuses on incorporating elements that complement a lifestyle, rather than on what is trendy or popular at the moment. For her family, that meant removing the existing peninsula and replacing it with an island where the girls could do homework and Smith could entertain family and friends.

“I could only ever fit two stools at the peninsula,” she says. “The girls sat in the stools while I stood up and my husband sat at a nearby small table. I wanted all four of us to be able to sit together, and I wanted to be able to have a party and set out a food spread. Now, my girls affectionately call the new island their own personal café and it has become a great place for family time.”

To accommodate her budget, Smith repurposed the peninsula cabinetry for the island, combining the 36″ door/drawer base cabinet with a new 24″ open-shelf cabinet that would enable her to remove the microwave from the countertop and house it in the island, which was another dream for her new kitchen. While Smith had hoped to replace the tile floor as a second phase of the project, running power to the island for the microwave ultimately damaged more tiles than what Smith had stashed away from the original remodel, so she had to move to plan B, incorporating commercial-grade luxury vinyl tile (LVT) that resembles hardwood.

“We were able to lay it right over the existing tile, using it as a subfloor,” she says. “I also love the vinyl’s wood look. While some clients like hardwood, between our kids and pets, we needed something that was waterproof and scratch proof.”

The designer was also cognizant to size the island with large enough aisleways to be ADA compliant.

“We are thinking about retiring in this home, so we wanted to have enough room for a wheelchair or walker,” she notes. “I’ve also heard horror stories about people not having enough room to pull out appliances when they stop working…or if you need to paint behind them!” 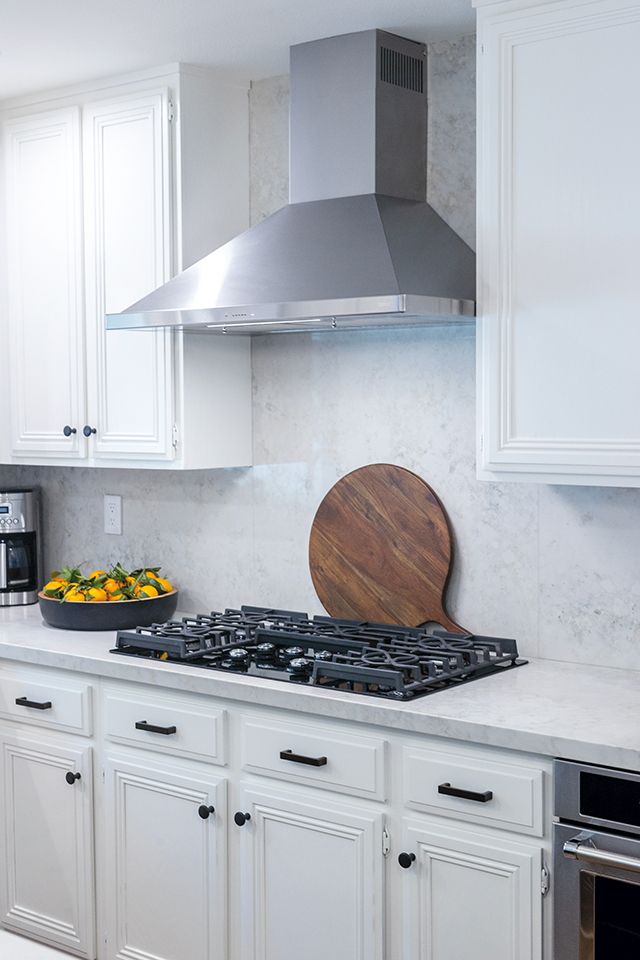 Choosing quartz as the island top checks both boxes for function and aesthetics, with its ease of maintenance meaning no worry about spills. Smith loves the quartz she used so much that she chose to repeat it as the backsplash throughout the entire kitchen, giving it focal-point status above the cooktop and behind the ventilation hood.

Choosing Vadara Quartz Surfaces’ Marbella quartz, fabricated by Planet Stone, as her island top checks both boxes for function and aesthetics. Functionally, its versatility and ease of maintenance means she needn’t worry about spills.

“As an interior designer I see so many different beautiful natural stones, including marble,” she says. “But I know my life couldn’t handle marble. I love my kitchen, but I don’t want to
be a slave to it. I can’t continually care for marble. Even now, I’m looking at my kitchen with spilled juice on the counter. We also just had a prom party where ice cream cake was melting onto it. If I had a porous surface, those ‘events’ could ruin it. Instead, the quartz gives me the look of marble, without the maintenance.”

This particular quartz color also matches the aesthetic goal Smith had envisioned for the space.

“It’s more of a cloudy pattern, without harsh veining,” she indicates. “It was important to me to have an updated modern kitchen, but I needed materials that matched the more traditional/Mediterranean vibe of my home, and a more prominent veining pattern would have been too modern. Plus, the grays, golds, browns and whites all blended together to tie in with my white perimeter cabinets, stained island and brown floor. People are constantly asking if it’s real stone!”

Smith loves the quartz so much that she chose to repeat it as the backsplash throughout the entire kitchen, giving it focal-point status above the KitchenAid cooktop and behind the Zephyr ventilation hood. While the designer kept her original perimeter cabinetry – giving it new life via a fresh coat of Dunn-Edwards’ Whisper paint and new Pottery Barn hardware – she removed the cabinetry above her previous undercabinet ventilation hood to give the quartz more opportunity to shine.

“I didn’t want anything to fight against the quartz,” she says. “I wanted it to be the primary focus in the space. Using it as the backsplash that goes to the ceiling really transformed the entire kitchen.”

While the quartz in large part steals the show in Smith’s new kitchen, she also attributes new lighting as a game-changer.

“People often think they can do a remodel without changing the lighting,” she says. “But lighting has so much to do with how welcoming a space is, and how it looks during the day and at night. It can also affect how large a space looks.”

Originally, Smith had a few recessed can lights and a flush-mount ceiling light to illuminate the space. During the remodel, she reconfigured the can lights and added two large Hudson Valley Lighting pendant lights above the island and a pair of complementary Hudson Valley sconces above the Blanco Precis Silgranit Anthracite sink, which is accented with a Graff Perfeque pull-down faucet that offers a modern mix of polished chrome and black.

“Sometimes it’s go big or go home,” she says in reference to the pendant lights. “If you have the room, adding large pendants above an island can actually make the ceiling seem higher. The pendant lights, and the hood vent, are also like a pair of great earrings that add subtle sophistication to the space. You can have a great outfit, but if the earrings aren’t right, the outfit is ruined.”

Did you miss our previous article…
https://www.texaspiekitchen.org/?p=111

August 18, 2022 Comments Off on Yes I Can Are Words That Can Be Uttered Regarding Home Improvement Tasks

What You Need to Know to Start An Amazon FBA Business

January 5, 2022 Comments Off on What You Need to Know to Start An Amazon FBA Business